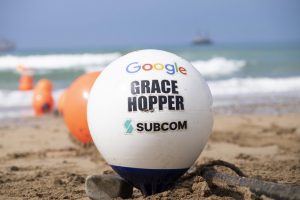 It’s named Grace Hopper – after the computer science pioneer – and Google has announced the successful completion of the trans-Atlantic 16-fibre pair cable. The company says it will “improve the resilience of the Google network that underpins our consumer and enterprise products”.

Specifically, it will be enabling Google services such as Gmail, Meet and Google Cloud. 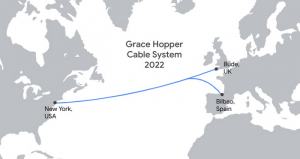 Pictured above is a Grace Hopper buoy landing on the beach in Bude, Cornwall, on 14 September. The landing in Bilbao was completed earlier in the month.

As it is the first Google-funded cable to the U.K., the Grace Hopper was described by the company as “part of our ongoing investment in the country”.

“We know that technology is only becoming more important for the U.K. economy. The amount technology contributes to the U.K. economy has grown on average by 7% year on year since 2016. And U.K.-based venture capital investment is ranked third in the world, reaching a record high of $15 billion in 2020, despite the challenging conditions from the COVID-19 pandemic. What’s more, 10% of all current U.K. job vacancies are in tech roles, and the number of people employed in the tech sector has grown 40% in two years. With this in mind, improving the diversity and resilience of Google’s network is crucial to our ability to continue supporting one of the U.K.’s most vital sectors, as well as its long-term economic success.”

The Google cable dubbed Dunant (named after the Swiss founder of the Red Cross, Henry Dunant) already connects the U.S. and France and Havfrue (Danish for “mermaid”) links the U.S. and Denmark.

“The multi-directional switching architecture is a significant breakthrough for uncertain times, and will more tightly integrate the upcoming Google Cloud region in Madrid into our global infrastructure,” adds Stowell.

The cables were laid in partnership with Subcom.